What Plants Were Called Before They Had A Name
Uriel Orlow

Within the context of Artissima, PAV Parco Arte Vivente will be presenting What Plants Were Called Before They Had A Name, a one-person exhibition by Uriel Orlow. Curated by Marco Scotini, the exhibition brings the artist back to Italy after his solo show Made / Unmade, held at the Castello di Rivoli in 2015.

Uriel Orlow’s exhibition sits within a frame of research that PAV has been dedicated to explore within the (post-) colonial context, focusing on mechanisms of Western oppression and indigenous resistance strategies as well as the series of effects they produce under the domain of today’s corporate capitalism. This focus is exemplified by the exhibitions Vegetation As a Political Agent (2014) and La Macchina Estrattiva (2017) now followed by Uriel Orlow’s body of work coming out of his long term investigation into the South African context.

Foucault states that “the theory of natural history cannot be disassociated from that of language”. Knowledge of beings cannot be separated from the possibility of representing them in a system of names. In any given culture, giving a name to things means dominating them, just as, in law, the juridical act of nominating is the exclusive prerogative of the subject who has the power to do this. If the attribution of a name, which is never a neutral gesture, conceals endemically coercive aspects, these become much more evident in those cases where the object of the denomination already possesses a name. The original name thus becomes a battle field, an area of conflict between the culture that generated it and the agents wanting to remove it from history.

European colonialism was both preceded and accompanied by important botanical expeditions. The intent was to explore and classify the new lands and their natural resources, thereby paving the way for occupation and exploitation. This exhibition’s title, What Plants Were Called Before They Had A Name, cites the eponymous sound installation, an oral glossary of autochthonous vegetation that lists their indigenous names in a dozen South African languages. The work tackles the mechanisms of subordination that led colonialists to rename the local flora, assimilating it into Linnaeus’s System.

As a whole, the corpus of the exhibited works stems from research carried out by Uriel Orlow in Europe and South Africa: through films, photographs, installations and sound, the artist proposes the idea of the botanical world as a stage for complex and articulated political dynamics.

Just as in his previous Unmade Film, Orlow again proposes a sort of exploded narration whose fragments, despite their individual autonomy, gravitate around a central nucleus that reveals the complex network of relationships between the various elements in the exhibition. In order to understand this, in the video The Crown Against Mafavuke, Orlow leads us inside the courtrooms of the Palace of Justice in Pretoria where, in 1940, Mafavuke Ngcobo, a traditional healer (inyanga) was put on trial, accused by the white establishment of “nontraditional behavior”: Mafavuke’s muthi remedies contained local herbs, some Indian remedies plus – and here lies the controversial element – western ingredients and patented medicines. The film explores the ideological and commercial confrontation between two different yet interconnected medical traditions, and their use of plants, with slippages across gender and race further questioning notions of purity and origination.

In the complex mosaic outlined by Orlow, the narration of the past finds its counterpart in the present within the dynamics of the post-colonial context. In a sequel, entitled Imbizo ka Mafavuke, light is thrown onto the expropriation strategies typical of multinational corporations, shedding light onto how the contemporary economy continues the exploitation of natural resources begun in the colonial period. 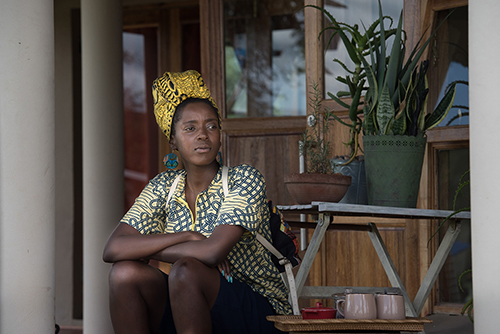