Scavo
2009
Village Green, environmental installation
The artistic research of Lara Almarcegui(1972, Saragozza; she lives in Rotterdam) principally regards the study and analysis, often in unpredictable ways, of the material components of the urban fabric. Il suo approccio è simile a quello di un archeologo contemporaneo alla scoperta di memorie sotterranee e stratificate che, del passato, possono far emergere aspetti del tutto sconosciuti a una sola indagine dello strato superficiale su cui siamo soliti camminare.
Tra le aree urbane indagate, Lara Almarcegui è principalmente interessata a quelle soggette a demolizione, a rimozione di materiali da costruzione e, non ultimo, ai cosiddetti Terrain vague, luoghi abbandonati e in attesa di una ridefinizione urbana.
For the Village Green exhibition, Almarcegui has created Scavo, an environmental installation that truly becomes a collective operation, seeing as the artist is more interested in the process and discovery accompanying the action than in an end result.
The removal of rubble from a surface area of 20 square meters dug 3.5 meters deep located in the narrow southern area of the park near Zino Zini street alongside the railroad – has also unearthed the old foundations of a previous factory, revealing an unexpected number of bricks pre-dating the latter industrial construction and geological layers testifying to the passage of time in this exact place.
Bringing the different layers of the soil to light, first of all, means analyzing the past of the area under investigation, a past where nature and history, the social and the industrial are interwoven. ScavoTherefore, Scavo inevitably has to do with the history of Turin, showing the deepest part the so-called ‘natural’ terrain (in that its soil hasn’t been contaminated by industrial debris), a portion that’s most likely traceable to the extension of the deeper layers of the structures to convergence of the Apennine hills above Turin dating from the fluvio-glacial age. Moreover, according to the artist, excavating portions of this soil also means working with the void, a sort of negative of the city where the physical action of digging – defined by Almarcegui as “going into the bowels of the earth” – takes on psychoanalytical aspects comparable to the idea of digging into one’s own memory and subconscious.

Lara Almarcegui, who usually develops her work through many phases, presents a two-phase work at the PAV. The first part involved the creation of the void where the relics of the foundations and other elements were discovered while digging, and which obviously conditioned the shape of the excavation, even as to the slant of its walls. The other part regarded the workshop, which like Scavo, was conducted in collaboration with geologists and experts in the sector, for further research and study resulting in the placement of the work in its natural, social and anthropological context.
Powerful in their simplicity, Scavo and Almarcegui’s other installations allow one to imagine the sites in some distant geological era and to observe them today revealed as conglomerates of matter and energy. 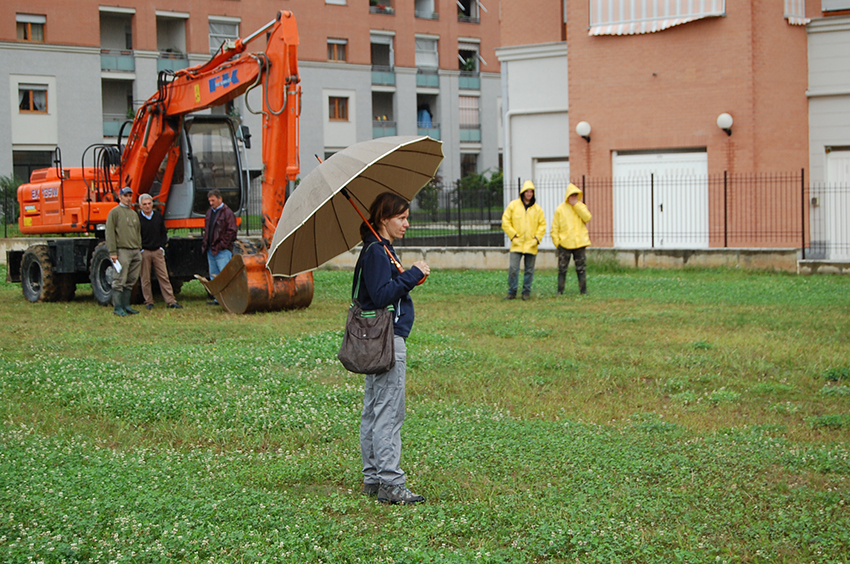 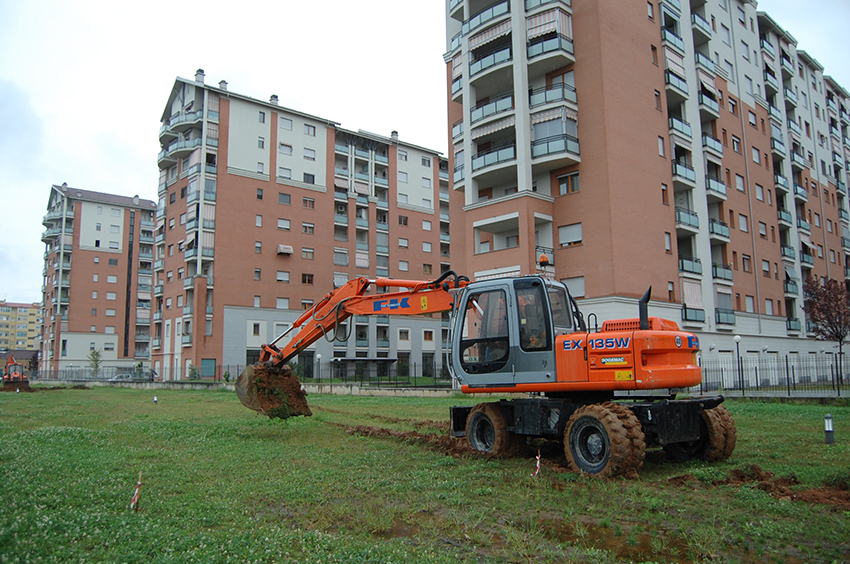 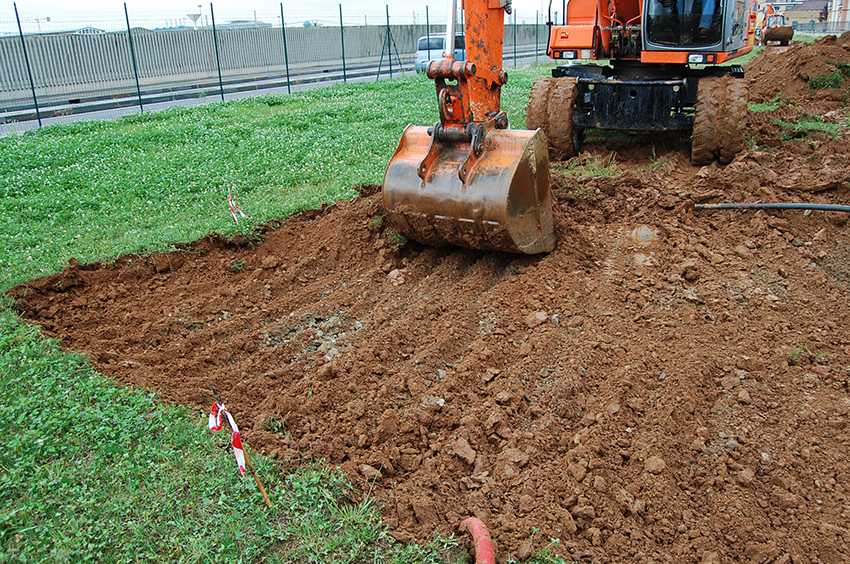 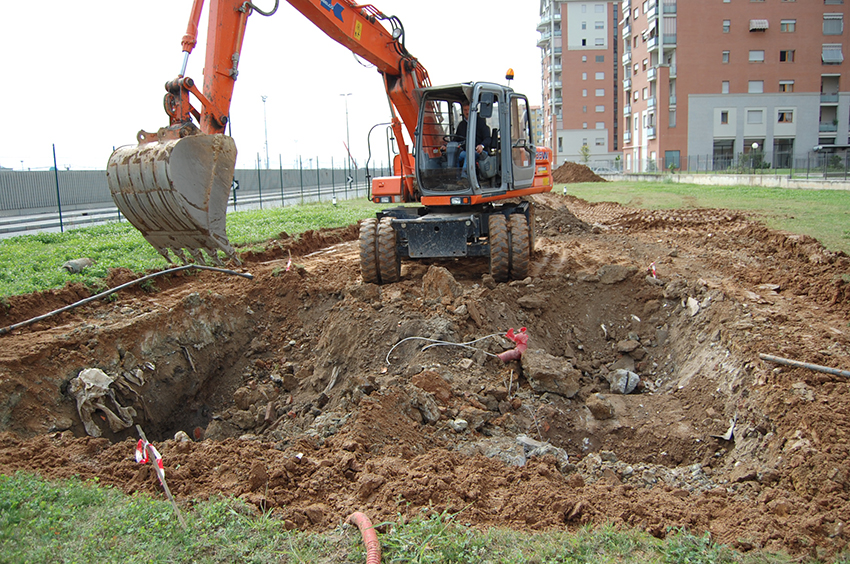 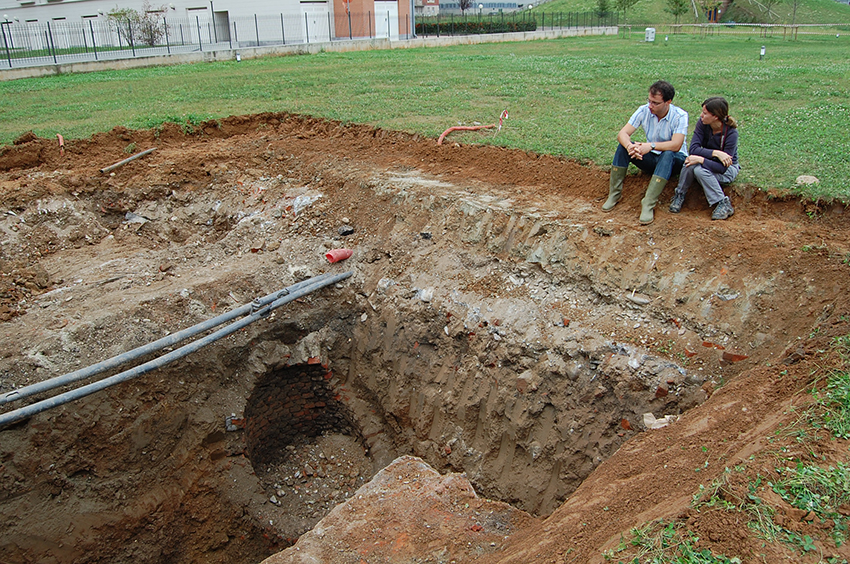 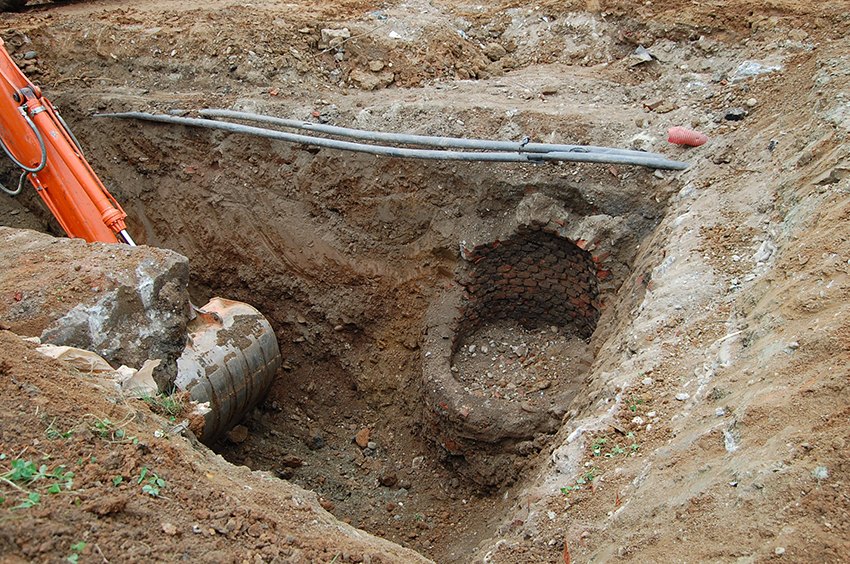 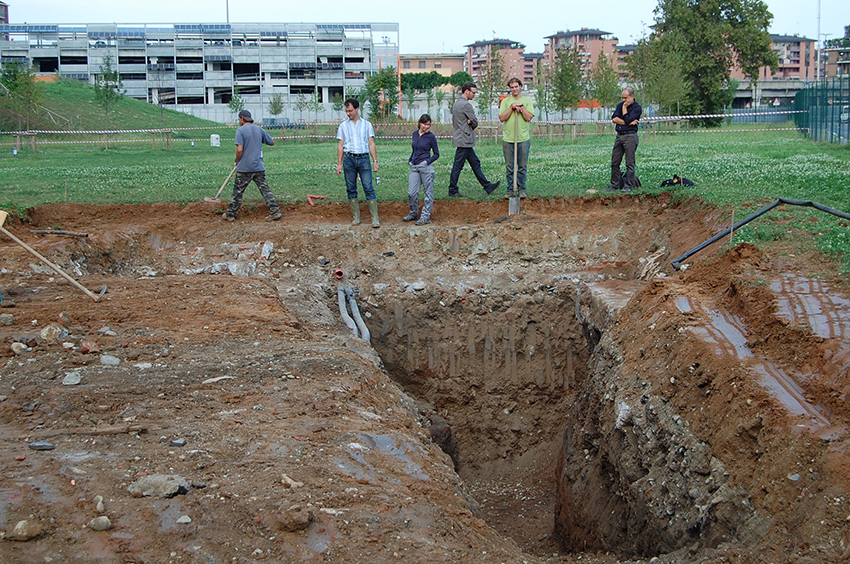 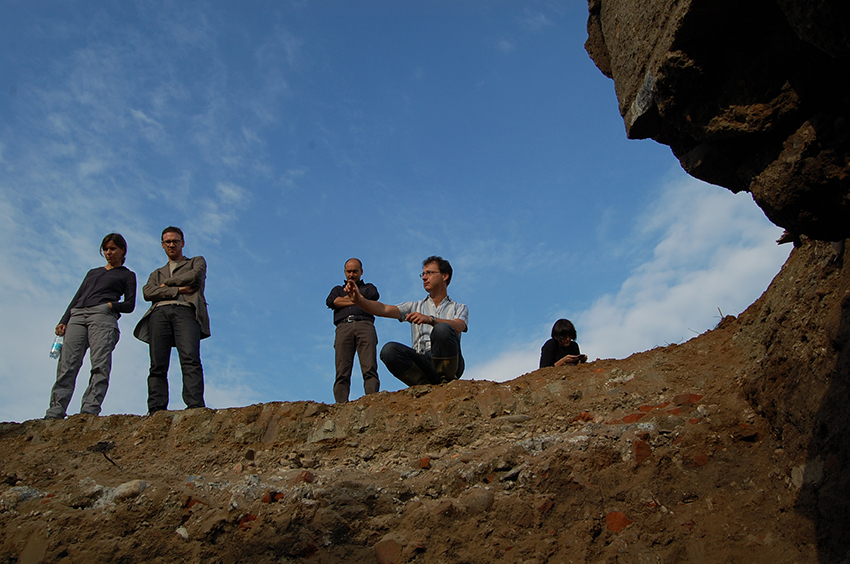 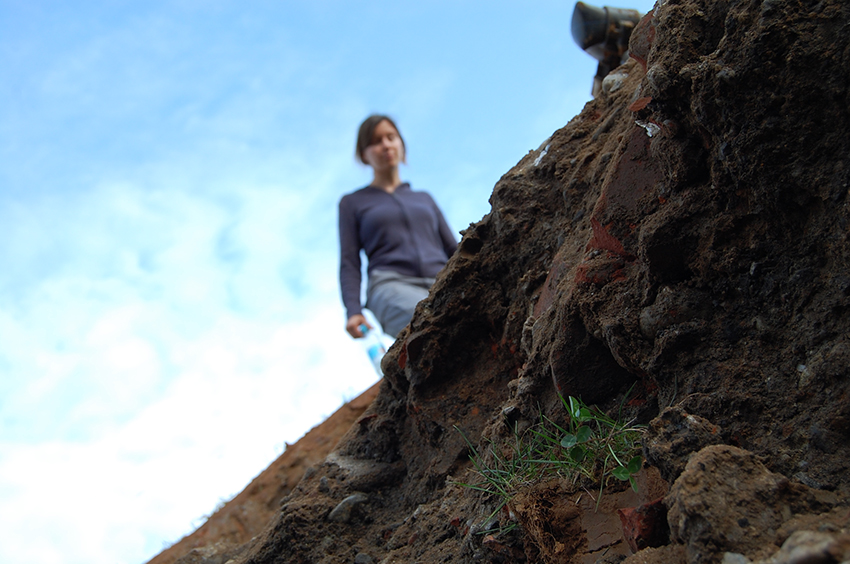 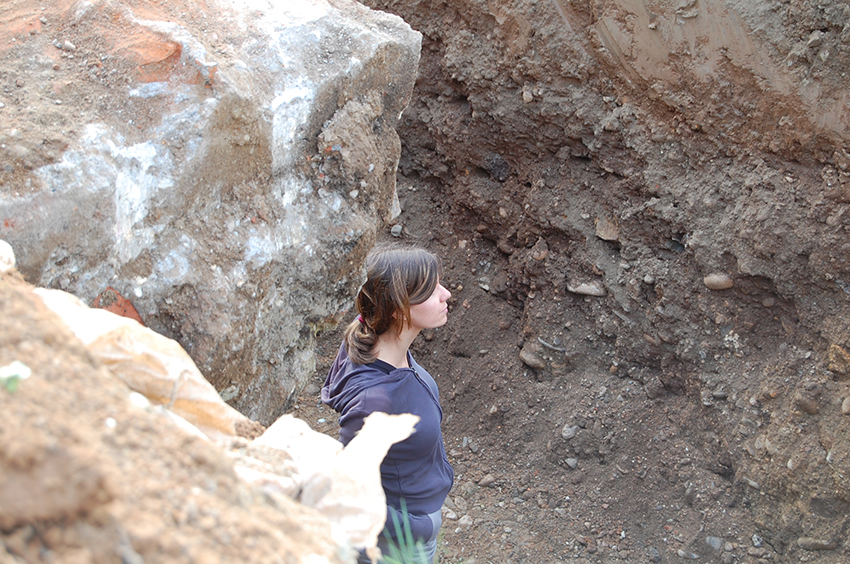 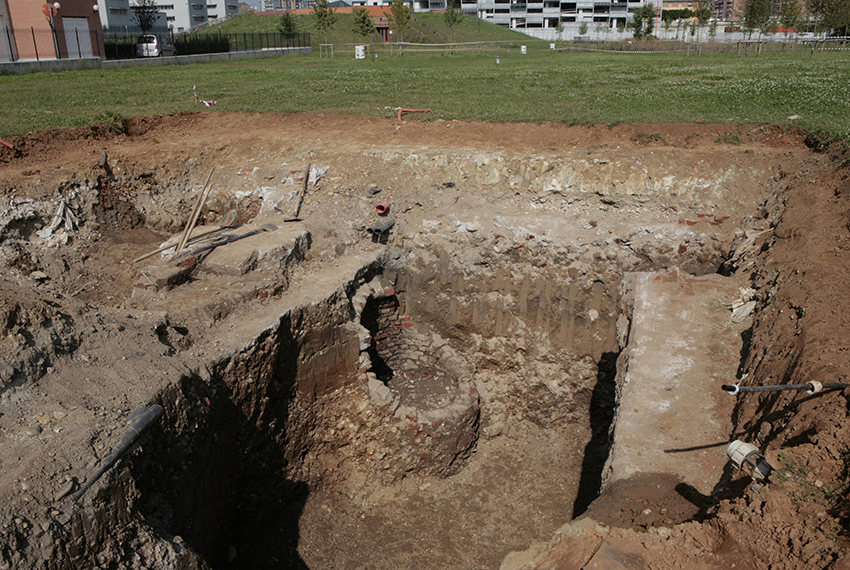